I am using a roll bar from MK with intergral upper seat belt mounts.

Should the roll bar stays go to the top of the main loop (the red line), or would they be better going to between the seat belt mounts (the yellow line)?

like the red line, much stronger overall imho, i don't think i've ever seen a rolbar braced the way you show with the yellow line.

I would brace to the seatbelt mounting points to strenthen them and it will also make sure that the SVA man is happy that they are strong enough. I would say that if that seatbelt mounting is more than 2mm wall thickness then it wouldnt need braceing...but im not an SVA man...

Justfor referance my belts are mounted in this manner on the rollbar,It didn't cause any trouble at SVA.And my 'bar isn't braced

I had the same decision to make a few weeks ago, and wasn't sure whether it is required even after reading the sva manual.
I have however seen several cars using the bar to mount belts without bracing, and I have now done the same.

It seems strong enough to me.

The red one is the way to go, it looks way better and there is no way that seat belt mount would fail on noit being braced, it looks well strong.
Looks quite high IMHO but guess that depends on the seats you are using

I suspected the red stay was the one to go for.

The seat belt mounts are quite high, so the belts will be mounted on the under side of the bar.

Thanks all the same.

If you want your roll bar to work as a roll bar and not fold over your head then brace to the top.

Thats what I did 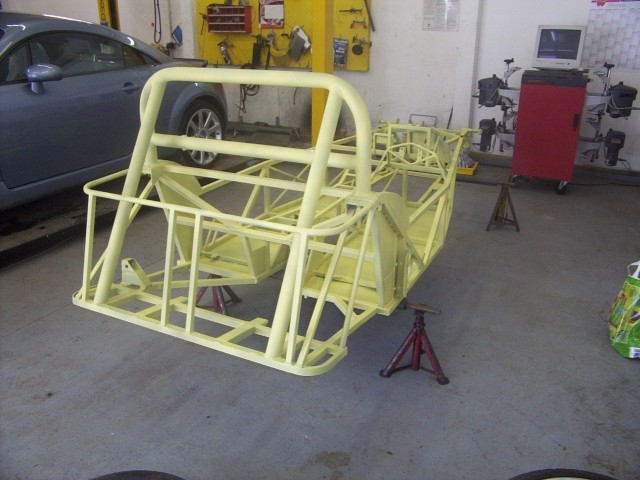 My Viento has the Bracing to the top bar, ie your RED line.
Not the best of piccies, but ahows the point.

Mark, that chassis looks so damn fine i've set it as my background!