hi guys need some more help , I still have this random cutting out ,thought I fixed it when I found a loose wire ,I notice the drawing on page 9 zzr1100 wiring diagrams ,on the negative battery side there looks like a diode and fused symbol is this correct ,what size diode and fuse would it be ,could this be the problem ,or could it be a air leek ,as I said its just random ran today for 15 minutes stopped started again stopped about a minute later ,started ran for a minute and stooped ,any ideas as iva is soon

Doubt it'll be an air leak. More likely from those symptoms an air lock/vacuum in the fuel tank. Eliminate that by running with the fuel cap off.

quote:Originally posted by adithorp
Doubt it'll be an air leak. More likely from those symptoms an air lock/vacuum in the fuel tank. Eliminate that by running with the fuel cap off.


won't be fuse either, they don't repair themselves, suppose it could be a diode failing, but they don't usually fail like that either.
so as adithorp suggests, check tank breather, then fuel lines and fuel filters too aliwizard - 9/6/19 at 08:27 PM

all new fuel lines, new fuel new fuel filters, the fuel tank has a one way roll over valve in the top ,but will try running with cap off any think is worth a go .cheers

ok here's an update on the cutting out problem, ran it tonight for 25 minutes it cut out twice ,I have removed the roll over relief valve so there no air lock in the tank , could it be a dry joint in the ecu igniter ,one thing I have noticed the engine revs drop a little when the fan kicks in its fitted with the Davies Craig electric water pump, the fan runs through a relay ,but its almost like the motor is being robbed of some voltage ,any ideas because I haven't lol.

Check all the earths are good, no paint on the joints etc and direct to chassis.
(i.e. not to a bracket that's then bolted to the chassis.. - had exactly what you're describing due to this one myself, at a particular harmonic it'd just stop..)

Engine revs dropping when the fan cuts in is normal. It's just the charging system load dragging the revs down a bit.

Have you got a battery cut-off switch? I've had those go dodgy and give your exact symptoms.

hi guys, yes I have 2 battery isolator swathes one to disable the electric reverse motor ,and one to power up the rest of the car, and 2 pvr25 power vamp battery's link together as when I engaged the electric reverse it killed the engine so a second battery solved the problem, as I have said I have just soldered the green and black side stand switch and black yellow earth together and just earthed to chassis ,but does show it to the negative side of the battery in the Haynes manual and running through a diode and fuse by the look of it ,I have not done this so far not shore if its necessary ,but I think its just to stop a feed back , what I do find strange is I have 12 volts from each wire with the ignition switched to second stage ,ie ready to start ,why12 volts from a earth wire will this voltage disappear when engine starts , cheers

hi guys, ok I have 2 battery's joined in parallel , battery 1 ,red from battery to isolator switch and then to starter solenoid ,negative to earth on chassis. battery 2, red to isolator switch then to electric reverse ,negative to electric reverse ,both batteries joined by red link wire ,but noticed I have not put a negative link between batteries, both have 13 volts and both have 14.6 when engine runs so alternator works. not shore if this would have any thing to do with cutting out

quote:Originally posted by aliwizard
hi guys, ok I have 2 battery's joined in parallel , battery 1 ,red from battery to isolator switch and then to starter solenoid ,negative to earth on chassis. battery 2, red to isolator switch then to electric reverse ,negative to electric reverse ,both batteries joined by red link wire ,but noticed I have not put a negative link between batteries, both have 13 volts and both have 14.6 when engine runs so alternator works. not shore if this would have any thing to do with cutting out


without linking the negatives both to chassis/ground/earth, you will certainly have all sorts of weird problems.
but I recommend when you first link them: do it using a fused connection of some form. (ie wire with 10A fuse)


edit: thinking about it, better to put a fuse in the red wire, and link the 0V rails.
but now I am thinking more, you are about to switch in a second battery, via its isolator, just when you want reverse, which is a very bad way of balancing batteries. - just leave them in parallel all the time.

ok guys an update on the cutting out problem, i put a negatives link between the negative terminals so the 2 battery's are linked in parallel, started up left to run for 25 minutes last Saturday no cutting out thought I cracked it , started this weekend just gone ran for 15 minutes stopped re started ran for about 10 minutes stopped twice , I thing it is hunting a bit so I turned idle speed up to about 1150 rpm but drops to 1000 then 1100 1150 very unsettled ,one thing I have removed is the vacuum switch valve on the top of the rocker and all the pipework and blanked to 2 outer carb holders off as per the inner two ,as the engine is a dry sump system I don't think this would have anything to do with it, and ideas before I burn the bloody thing lol ,or am I being just to picky do these engines cut out anyway on idle bearing in mind its a 1998 engine help

I replied to your other thread but it looks like this one is more active so I'll post here again.

I'm building a zzr1100 BEC at the moment too, the engine isn't running perfectly but thats because the carbs aren't properly setup yet. Importantly it never cuts out.

Here's a link to my wining diagram (Might be useful)
I drastically cut down the original loom leaving only the bare minimum needed to run the engine.
There is a diode in the diagram on the black/yellow wire, but I dont have this on mine. 
Are you using the single plug 'D' igniter. or the two plug 'C'?
The D requires a 100ohm resistor on the grey wire. Might be worth checking if this is loose?

Also might be worth checking the voltage on some of the other wires.

Just released I had a diagram for the C model too. 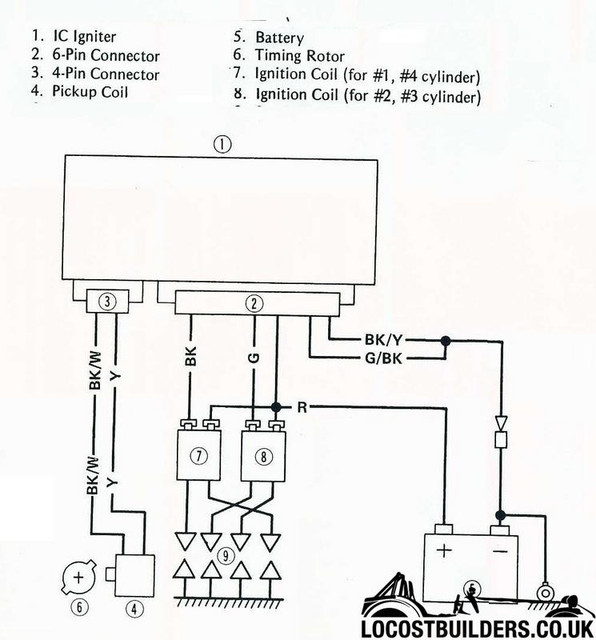 hi nick9one1 I did the wiring years ago so it would be a dash out job to check it all ,but I might have to do it if I cant find the problem. I have 100 ohm resistor in the system. I ran a switched feed to the starter relay from the car ignition so its wired slightly different to yours , one thing I am confused about is I have 12 volts from the black yellow earth wire , and 12 volts from the black green wire both soldered together then put to negative on battery Shorely there should be no voltage from earth ,and putting 12 volts to earth seems odd,

Yep that's not right at all.
I don't want to insult your electronics skills but how are you measuring it? Presumably one lead on battery negative/chassis and the other on the black/yellow wire?

If the black/yellow is grounded and you're measuring from ground, it's impossible to get 12v ?

measuring with a multi meter ,as you say live on black yellow wire black to battery ground 12 volts same for green black wire ,but this is with the ignition turned to second stage ie dash lights ignition lights on, but I have not started the motor it would not start anyway because it not grounded not shore if these voltages would go when the motor is started ,I have put a spare igniter on and same thing

if you are reading 12v on the black/yellow & the green/black, then there is a bad connection in the chassis/0v wiring, between where they join, and the 'ground' point you are testing to.

thanks gremlin 1234,forgive my ignorance what do you mean by ov wiring ,so are you saying there is a bad connection somewhere or do I have a wire down to earth somewhere, the trouble is I have been building the thing years so have forgotten what I did I will end up with the dash out I think , just sat here thinking ,when I first wired it I think I had about 3 volts out of the green black not shore about black yellow as you say there should be nothing from this wire as its earth , not shore how now I have 12 volts from both of the wires where are the getting there feed from

quote:Originally posted by aliwizard
so are you saying there is a bad connection somewhere or do I have a wire down to earth somewhere


I am saying there is a bad connection, at the point where both wires go to the negative terminal of the battery.

ok the black yellow earth, and green black are only 2 inches long they come out the igniter plug soldered together then soldered to a longer wire that goes to the battery negative so there is no brakes there ,I am baffled as to where the 2 wires are getting there 12 volt feed ,and would this problem cause the random cutting out , only other wires are the ignition feed to starter relay and coil feed ,I will have to have I look and start rechecking the wiring im baffled

ok disconnected multi plug to ic igniter ,the female has the feeds, ie power from ignition ,turned ignition on second position checked black yellow earth wire no volts ,same for black green no volts so no fault at ignition earth fault ect ,plugged back together ignition on got 12 volts from wires, tried spare ic igniter same thing ,so unlikely to be a igniter fault ,could it be a fault somehow with the pins in the female section of the connector

quote:Originally posted by aliwizard
could it be a fault somehow with the pins in the female section of the connector


not very unlikely to be in that connector, since 2 wires are exhibiting the same fault, and they join after the connector.
it's most likely air in the long black wire or its connections.

put a jumper to both ends of that black wire, (exactly where the meter probes are) and it should work. [unless your weird battery pair and isolators are still not sorted ] aliwizard - 30/6/19 at 09:55 AM