I’m an ongoing problem with my clutch not disengaging its between an mx5 engine/box I've change the hydraulic system and its still no better. When the engine is off the clutch peddle feels heavy and comes to a stops before it comes to the end of its travel but with the engine turning there isn’t enough travel to disengage the clutch and the peddle bottoms out.
I’ve pulled the clutch out and I can’t see anything obviously wrong with it, but for a lack of knowing what else to do I’m planning on changing the clutch. The clutch and fly wheel are new and where supplied by a well-known MX5 tuning company as a kit, I’m wondering if the kit is made up of parts the bolt together but don’t actually work together, I have noticed that the kit is no longer for sale so I wonder if other people had problems with it.

Simple answer it doesn't sound like you have the right parts.

Check the spigot bearing, if it is a needle roller type fit a new one. Has the clutch ever worked correctly? If not it could be down to the clutch pedal leverage ratio? If it has worked correctly with the original clutch then it could be down to the new clutch/flywheel ? I have had similar problems over the years that I have tried extending the slave cylinder pushrod using a female brake pipe nut , a bodge I know

I may have spotted a potential issue or a red herring, on the fiction plate the built-up area the centre has wear marks which could be from the pressure plate prongs clashing when the clutch is depressed. I’ve look on line and other mx5 friction plates and the don’t have this high built up area. In my head this still doesn’t explain the change in peddle travel with the engine running. 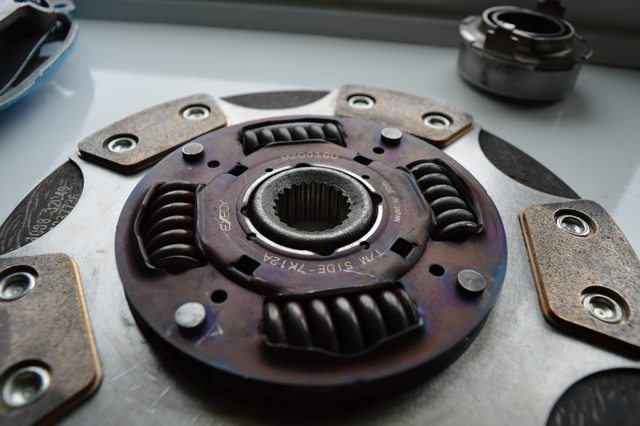 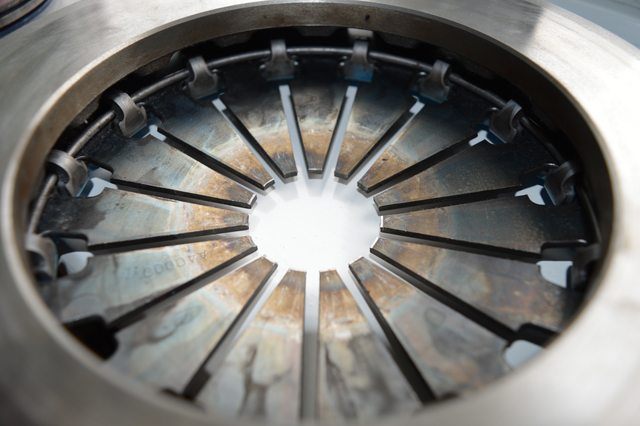 Are the master and slave cylinders MX5 original units or new OEM spec parts etc? I.e. you've not upsized something

Being hydraulic, have they been bled correctly? I didn't think the original set up for the clutch was assisted by the engine via servo or vacuum etc?

The slave cylinder is standard mx5 tha master is OBP 0.75 which i believe is the same size as the oem cyclinder.
I've bled that system several was from the standard foot down up valve clos valve foot up to pressure bleeding.

I'm at the point where I'm thinking of replacing the clutch with one from a reputable manufacture like Exedy so at least i can cross that off the list.

I’ve been doing some research and the part number on the friction plate comes up as a standard Exedy mx5 plate but instead of disc on both sides but this one has 5 pucks on the transmission side so it could have been a special run commissioned by the seller. Interestingly on the sellers web site the friction plate on the listing is different and doesn’t have the high centre area.
The Exedy standard friction plates are 215mm wide and the heavy-duty plates are 220mm, the Exedy standard pressure plates and heavy duty plates look different as well the heavy duty plate have a lot more prongs. I’m thinking that the standard friction plate is not compatible with the heavy-duty pressure plate

stupid question but why did you not just buy a standard clutch?

Any chance that the clutch disc was flipped 180 during installation [wrong side facing the flywheel].
Davew823

I’ve not used a standard clutch because the engine will exceed the torque limit.

The friction plate was in the correct orientation, that’s the fist thing a checked.

I think it’s going to be your Obp master cylinder. Do a search. I think there has been a few.

I had one on the brakes where it wouldn’t release the pressure on the brakes, locked them solid and would only let them of by bleeding the fluid out of the nipple on the caliper.

Swapped the master and all fixed.

A new MX5 Exedy clutch kit arrived yesterday the pressure plate was visual the same, but the friction plate was 2.5mm thinner so part of the problem could be down to the friction plate being to think on the old clutch. Also, this could have been affecting the peddle throw as the thicker plate would have been depressing the pressure plate spring resulting in the slave cylinder bighting point on the clutch fork being over extended.

When I unpacked the friction plate one of the puc’s was damaged where it looked like it had been dropped so I’ve sent it back, and to make things worse when I was printing the return information my printer broke and I had to go and buy a new one which took a long time to set up.

make things worse when I was printing the return information my printer broke and I had to go and buy a new one which took a long time to set up.

Really? Thats the most constructive thing you can respond with how is that helpful.

I just had one cylinder play up that just happened to be on the brakes.

New clutch in and it feels a lot better, the master cylinder with the integrated reservoir is a lot neater as well. I’m planning a test drive after work so fingers crossed the clutch is fixed.