I would like some help please to get the wiring correct on the alternator in my MX5 engined kit. The old engine (pinto) had two wires the 12v output of the alternator to the battery and the 12v energizer wire via the charge light.

I now have this mx5 alternator which has three terminals. page 5,one goes through the bulb,the other is ignition controlled

Just to make sure i understand the diagram and these questions should stand me in good stead for the future.

The little arrows under the fuse point the flow of electricity?
On the alternator, the solid back dot (White wire) represent the bolt connector and the other two represent the plug?
Does it matter with way around the wires go into the plug? Looking on google now for an image.
Any idea why the alternator requires the 12v supply on the white/green wire? quote:
The little arrows under the fuse point the flow of electricity?


No it's a symbol for Connector

Sorry don't know the answers to the other two questions.

I'm also using MX5 bits but not the clocks so wired my charge light as below. Wire colours and fuse ID maybe different. 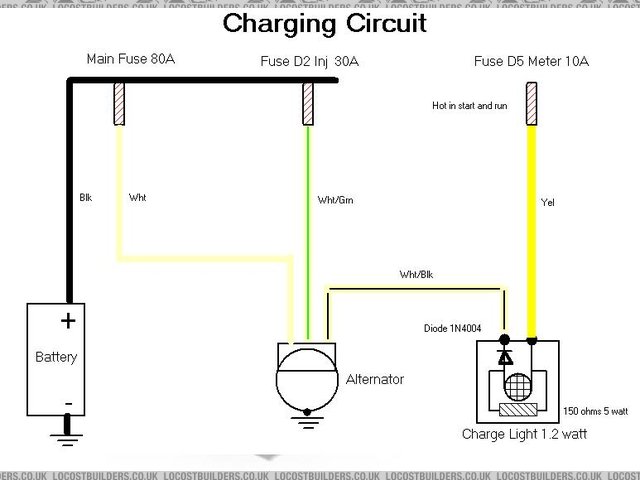 Any idea why the alternator requires the 12v supply on the white/green wire?

That will be to energise the stator/magnets into generating electricity.

Without it the alternator may just spin and not make any juice.

quote:Originally posted by coozer
Any idea why the alternator requires the 12v supply on the white/green wire?

That will be to energise the stator/magnets into generating electricity.

Without it the alternator may just spin and not make any juice.

OK.... I think i have understood my own confusion. I agree that the 12v is required to energize the alternator, i thought this would come from the 12v going though the charge light. Then when the alternator is charging, this light goes out. Well that is how it was wired on my Pinto.

So what i now understand is:

Roughly the same idea as the pinto, just a slightly different implementation. rdodger - 28/9/15 at 03:23 PM

The MK2 had an ECU controlled alternator. The MK1 isn't.

If you have mk2 engine/ecu you need to swop to a mk1 alternator.

Note to self, look at a wiring diagram first.

Thanks for the assistance.

I'm currently(!)ly stuck on this issue with my build. I'm using a mk1 MX5 alternator as above but with my own loom and instruments, an Acewell 7659. This doesn't use the alternator to feed its battery light so I'm stuck wondering if I can simply run the white/black wire to a switched 12v source without a light inline.

Can anyone help at all?

Mk2 mx5 alternators are ecu controlled, mk1 mx5 is not. If you have a standalone ecu use the mk1 alternator

Any part numbers on the alternator?

Today we finished our supercharger install on our Mk2.5 with the mk1 alternator.

I've searched tons on Internet and not found a simple explanation.knowing that when I searched this link came up a few times. So hopefully this will help someone.

Our 2.5 1.8 mx5 has the issue with the ecu Controlled alternator so we went for a 1.8 mx5 mk1 alternator to solve our issue.

We plugged everything in and still no alternator working.

After a lot of reading my old alternator without the internal ecu gets data from the ecu but the mega squirt 2 won't control pcm. Also meaning the wiring from the d-p alternator is wrong.

So not the easy swap I expected.

But we found a work around.

The l-s internal regulated alternator normally takes the l feed from the lamp signal on the dash. Which is the bottom plug on the current plug used.

So my work around. The s wire is supposed to goto injector live with the 30amp fuse. Which I will do eventually. Currently s is going the alternator live main nut.

The s is to the bottom plug on the original plug.

Started her up and she run fine giving 13.8 on tick over but raising slowly but car was in the garage so I didn't wanna die of exhaust fumes. So shut her off soon as it went above the current 12.3 level it was at.

So that's my work around solution until I'm able to follow the original route.

For your reference the s pin s the bottom pin and L is top.

I used some terminals and spare wire for the temp install. And will sort something more permanent later on.

Best of luck all.

Final thing if your changing from Mk2 to mk1 then the bottom bolt is different. Source a M10 120mm and nylok but if your reading this then you probably already know this. As the Mk2 has a threaded bottom mount which the mk1 doesn't.